Warning: This story contains spoilers for Game of Thrones season 8, episode 2, “A Knight of the Seven Kingdoms”…

The Game of Thrones stars were sent their season 8 scripts at the exact same time, but the Sansa Stark actress read her copies at lightning speed. When Turner reached the moment in episode 2 where Arya Stark has sex for the first time, she instantly called her friend.

“I called Maisie and was like: ‘Have you read it yet?’” Turner recalls. “And she’s like, ‘I’m midway though episode one.’ And I’m like: This scene, this page, read it! This is awesome! She was very happy.”

Confirms Williams: “Sophie said, ‘Whatever you do, you have to skip to this episode, this scene first.’ So I just read that and it was practically all I knew about the entire season.”

Williams initially suspected the scene between Arya and her handsome friend and former traveling companion Gendry (Joe Dempsie) wasn’t actually legit. Showrunners David Benioff and Dan Weiss have pranked their cast by sending them bogus scripts in the past (such as sending Kit Harington a scene in season 1 where Jon Snow’s face gets horribly disfigured). “At first, I thought it was a prank,” Williams says. “I was like, ‘Yo, good one.’ And [the showrunners were] like, ‘No, we haven’t done that this year.’ Oh f—k!”

By the time the scene was being read aloud at the final season table read, Williams accepted that, yes, Arya was going to sleep with Gendry on the eve of the great Winterfell battle against the Army of the Dead. “I got to the read-through and I’m reading the scene and thought, ‘Oh, we’re actually going to do this. When do I shoot this? I need to go to the gym.’ A whole list of things.”

There was a sensitive pragmatic question which needed to be answered, however. To put it bluntly: Was Arya going to be naked on camera? Many cast members have appeared nude on the show, though typically signed on when they were at least 18 years old (and often agreed to nudity as part of their deal). The 22-year-old Williams joined Thrones when she was 11 and has grown up in front of fans. Williams says the showrunners let her decide precisely how much to show. “David and Dan were like: ‘You can show as much or as little as you want,’” Williams says. “So I kept myself pretty private. I don’t think it’s important for Arya to flash. This beat isn’t really about that. And everybody else has already done it on the show, so… “

Still, when it came time to film the encounter, Williams had to be naked-ish on set, and that was a naturally a bit awkward. “In the beginning, everyone was really respectful,” she says. “No one wants to make you feel uncomfortable which kind of makes you feel more uncomfortable, because no one wants to look at anything that they shouldn’t look at which in turn makes you feel like you look awful because everyone is kind of like—“ [Williams averts her eyes]. “You want people to act more normal.”

Continues Williams: “Then [the scene] was rushed. We were [directed by] David Nutter, who has a habit of speaking fast anyway. By the end we’re rushing to finish the scene and David is going, ‘Okay, you’re going to come in and do this and do that and, great, take your top off’ — and then walked off. And I’m like … ’Okay. Let’s do it.”

Dempsie suggested the experience was strange for him too for given how long he’s known Williams, who’s about a decade younger than him. “It’s obviously slightly strange for me because I’ve known Maisie since she was 11, 12 years old,” says the 31-year-old actor. “At the same time, I don’t want to be patronizing toward Maisie — she’s a 20-year-old woman. So we just had a lot of fun with it.”

But Williams says what’s most important to her about Arya’s battle-eve night of romance wasn’t reading the scene or even filming it, but rather what this moment meant for her character. Year after year, Arya has been laser-focused on survival and training and revenge. Being with Gendry meant that, for one night at least, Arya had an experience that put her back in touch with her humanity.

“It was really interesting because it’s a very human relationship for Arya,” Williams says. “This is something she’s stayed away from, an emotion we’ve never really seen her engage with. David and Dan were like, ‘It’s the end of the world, what else would you have her do?’ This may be is a moment where Arya accepts death tomorrow, which she never does — ‘Not Today.’ So it was that moment where she says, ‘We’re probably going to die tomorrow, I want to know what this feels like before that happens.’ It’s interesting to see Arya be a bit more human, speak more normally about things people are scared of." 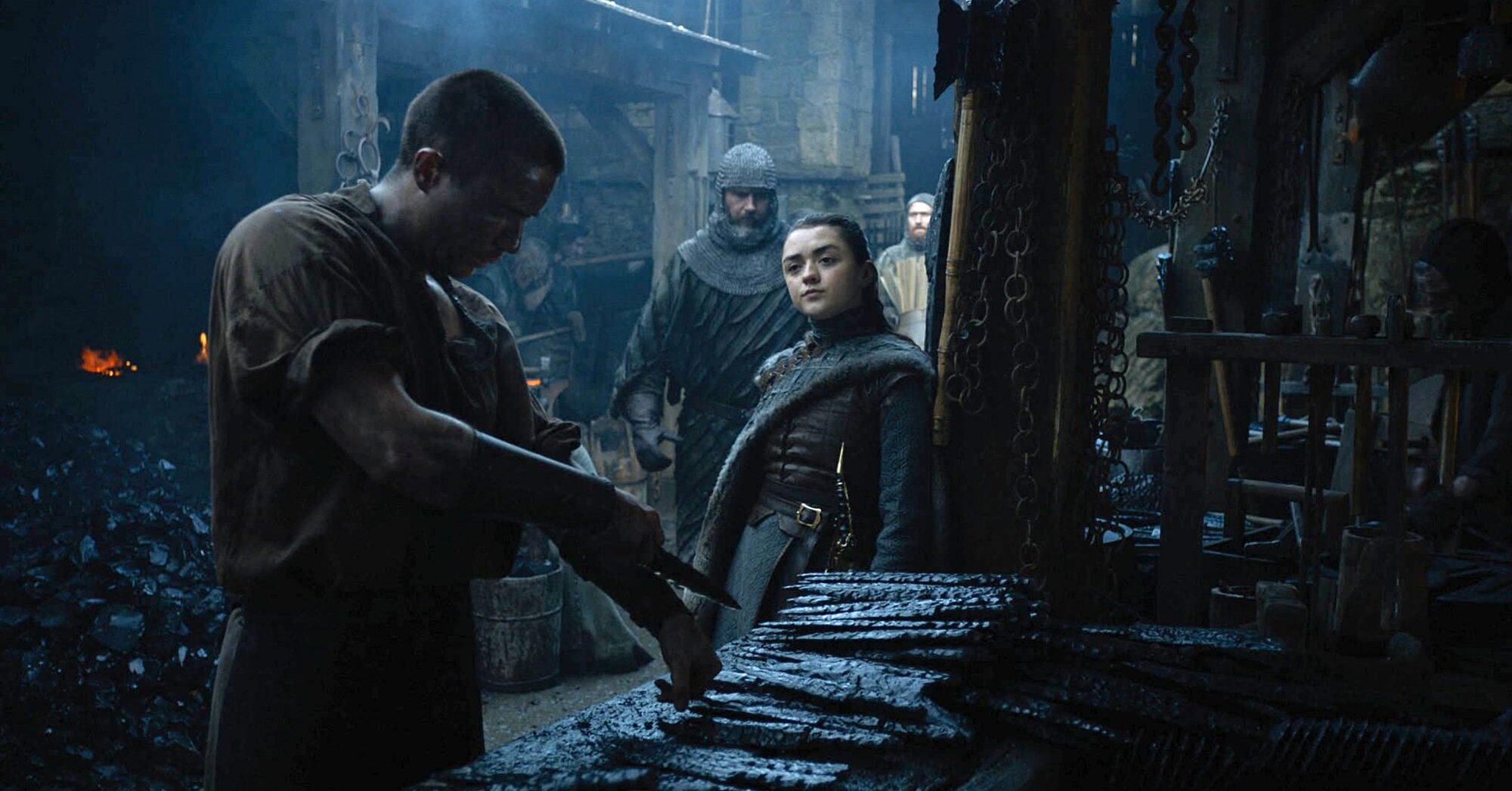 Exclusive: Maisie Williams on Arya Stark's big Gendry moment: 'At first, I thought it was a prank…'

Users Who Are Viewing This Thread (Users: 0, Guests: 1)